18F is an government contracting agency that acts more like a tech start-up than a traditional government agency.  They introduced a short timeline, design & development challenge around the OpenFDA API to vet future development partners. We used the challenge to demonstrate our ability to design and develop a viable software product with a small, experienced team in an extremely short timeframe. My role as design lead was to assess the OpenFDA and design the most impactful product we could create with a small, agile team in a short timeframe.

When the development challenge was released, 18F gave no specification of “what” type of product they’d like to see except that it should leverage the OpenFDA APIs and US Digital Services Playbook. An open concept played to our strengths: our design team has helped 50+ entrepreneurs visualize their product concepts over the past 3 years.

Design studio approach: We start with a brainstorming sessions and broad set of concepts, then narrowed down the product functionality based on the technical feasibility of the API and impact and usefulness to the user. Our design team initially considered an app to track a list of commonly used food for a restaurant against the FDA’s published food recalls. Given further research, we pivoted the concept to drug safety as it’s impactful to a larger group of users and the FDA’s stated business goals of safety and openness.

Limiting Scope for a short timeline

So there were a lot of product ideas we COULD have done… including pulling half the company into the development of an idea.  Instead we scoped our initial concept to fit the effort level or a small dev team of 5 over a period of 3 days. The goal of the development prototype was to showcase our ability to rapidly design & build a product of value in a short timeframe.

We set up a war-room atmosphere. Sitting together encouraged collaboration and made communication easy. And since we all have real jobs to do at the same time, we implemented a basecamp project to keep everyone in the loop and get feedback from the team throughout the design process. My design process was tailored to match the rapid timeline:

Early on, we have leveraged clickable static image prototypes to elicit feedback from people familiar and unfamiliar with the apps goals. This feedback helped to quickly test our assumptions, discover if the user experience was intuitive & simple, and iterate on the apps user flow/functionality.

In the first day of design we user tested 3 prototypes for feedback through a series of InVision clickable prototypes. Then iterate on design and functionality based on feedback.

We could have published a very minimal app, but it wouldn’t be clear to the user why or how to use it. The marketing aspect of explaining “why” the app existed and how to use it are a big part of the overall user experience. This “about” statement required a surprising amount of iteration, but helped keep the app focused and reinforced it’s original goals.

The Med Pal application allows an informed consumer to research individual drugs for recent recalls or label changes through the OpenFDA API. Similar to subscribing for updates on social media, you may choose to “follow” a drug of interest and be alerted of changes when you revisit medpal.sparcedge.com.

According to FDA research, there are approximately 106,000 deaths per year attributed to adverse reactions to prescription drugs. One in five hospital visits are the result of a drug reaction. And adverse drug reactions are estimated to cost our country $135 Billion dollars a year.

Our original concept had been building a list of drugs you take, then revisiting it that list at a later time to see if something had changed. But the early prototypes proved building lists was a tedious user experience. Somewhere over a beer, it dawned on us that we’re simply “tracking” drugs of interest – in a social fashion, this is a lot like “following” a drug. You follow people on twitter and see their updates on an activity feed. Why couldn’t this be the same?

By mimicking the social media experience of “following”, we are able to make interacting with the app modern and familiar to the user. 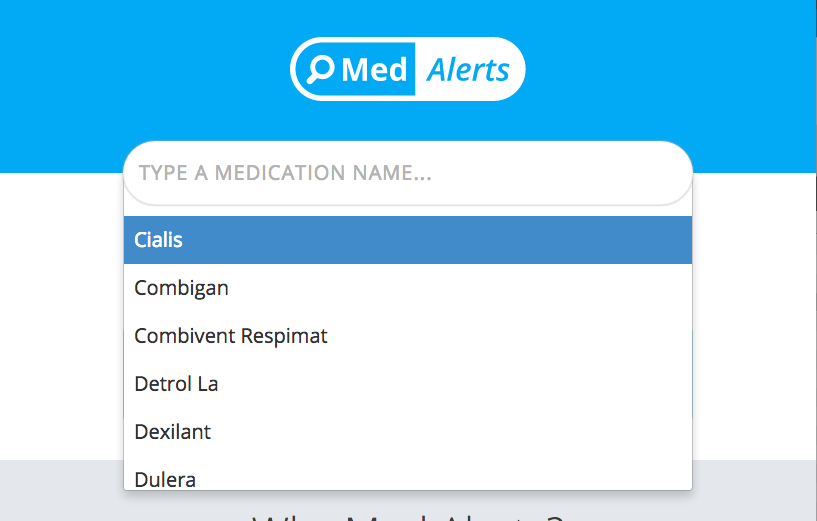 And one more lap

The first iteration was on track to be published through GITHub when we discovered the challenge had been extended to allow more time for development. Being near the completion, we opted to publish and then treat the product backlog as a second release. This also allowed us time to pivot the original design and add new functionality of drug interactions.

Using the same techniques, we pivoted the product branding and layout. This streamlined the app even further. The new layout eliminated the need for a modal window, which had been a usability issue in the first release.

This is a great example of how quickly a experienced, collaborative design & development team can evolve a software product from concept to release.